And so Heinrich Schmidt found himself in a small rubber dinghy a few hundred yards off the coast of Southern England.
As the U- boat slid beneath the waves he realised the naval intelligence of the tides  was badly wrong. 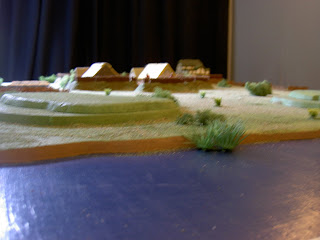 Instead of being able to drift landwards with the tide, he found himself fighting a maelstrom of wind and tide, He steeled himself for the effort and prayed that his strength and energy would be sufficient to get himself safe to shore where he could adopt his true persona of Henry Smith, Traveller in Ladies Underwear.
Posted by Douglas at 00:32 5 comments:

A few all too short miles away on the other side of the channel, another general and his staff were studying the same maps,
Ludwig von Tiddenheim, Commanding Army Group West, looked around the room at his staff and pondered the future;
Von Bearstein, Alte Fritz and the others were all capable Commanders, but he was all too well aware that half the struggle would be against his own high command, There were just not sufficient resources for the Grand Master Plan and he as the sacrificial left flank was unlikely to get much of what he needed in materiel.
Seperated from the main landings by the Isle of Wight and Southampton Water and tasked with driving north west to Bristol, thus cutting off the entire South West, would place him and his men in the invidious positon of having two or more fronts on which to fight.
Against him he expected to find a well prepared defensive position under the command of a commander of equal expertise,
This had all the makings of a very private little war!

His hopes of success rested on his chief Engineer, Rorsaach could be relied upon th see things a little differently from others and come up with a Very Cunning Plan.

But his first need was for intelligence.
Posted by Douglas at 01:23 No comments: